On Sunday afternoon, June 17, a wonderful program of viola music and historic/literary reflections took place at Gustin House, marking the 112th birth anniversary of Lyell Gustin (b. May 31, 1895, Fitch Bay, in the the Eastern Townships of Quebec). James Legge, principal violist of the Saskatoon Symphony Orchestra, and Gregory Schulte, pianist, performed works by J.S. Bach, Robert Schumann, and Ernest Bloch, along with a selection of song transcriptions.

Martha Blum, linguist, author, pharmacist, musician, and recent recipient of the Honourary Doctorate of Letters at the University of Saskatchewan, gave a rich and nuanced talk on “The Inheritance of Austria in Word and Music.” Dr. Blum paid tribute to Lyell Gustin--who had been her piano teacher for some time--noting that this celebration of the arts was the very kind of event which Dr. Gustin hosted as early as the 1930s in his elegant piano studios. The appreciative audience enjoyed meeting her and the performers, as well as the viola maker who had created the instrument Mr. Legge played in the program (see photos below; photography courtesy of Michael Pomedli). 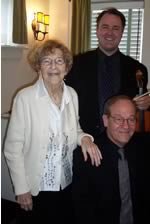 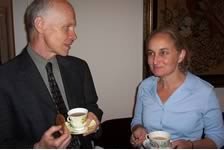