In recognition of a century of the musical leadership and legacy of Lyell Gustin (1895-1988), City Council proclaimed May 27, 2012 as Lyell Gustin Day in Saskatoon! This day, and indeed the entire year, celebrated Dr. Gustin’s arrival here from his family home in Quebec in the summer of 1912. Already an accomplished and award-winning musician at the time, he chose Saskatoon as his permanent home, and over the next 70 years made a profound impact on music and the arts in our city, our province and nation, and beyond. Among special events on May 27 was a Heritage Plaque Unveiling Ceremony.

At the Gustin studio/residence at 512-10th Street, dignitaries and guests gathered in the early afternoon of May 27 to unveil bronze plaques identifying Gustin House and the historic Trounce House (located at the back of the lot) as designated Provincial and Municipal Heritage Property. Notably, the declaration of the Dr. Lyell Gustin Residence as Provincial Heritage Property is only the third such designation in Saskatoon.  Photos below by Michael Pomedli. 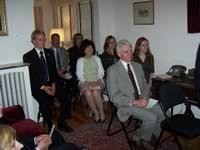 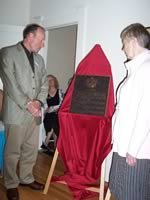 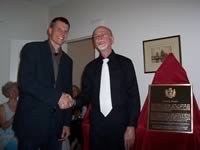 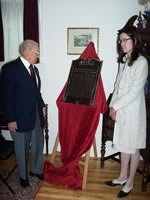