Lyell Adams Raphael Gustin was born on May 31, 1895 at Fitch Bay, a town on Lake Memphremagog in the Eastern Townships of Quebec near the Vermont border. His father, Ammi Gustin, was of French Huguenot descent and his mother, Helen Drew Gustin, was of United Empire Loyalist stock. Lyell was the youngest of four sons, being nine years younger than Christie, the next oldest son. 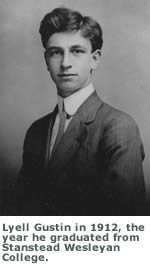 Lyell showed musical talent at an early age and studied with a local teacher, Sarah Scheafe. At the age of twelve he became a resident student at Stanstead College, some twenty miles from Fitch Bay. Besides the usual academic classes, he studied piano and theory with A. Harlow Martin, an inspiring teacher at the Eastern Townships College of Music, an affiliate of Stanstead College. In 1912 he graduated from Stanstead and in his music diploma examination taken through the Toronto College of Music he was awarded the highest marks that year in Canada.

In the summer of 1912, when Lyell was 17 years of age, the Gustin family moved to Saskatoon. From 1912 to 1916 Lyell studied with a Saskatoon teacher, Blanche St. John Baker, who had been a pupil of Leopold Godowsky. During these four years he became well known as one of her more talented students, as a public performer and as a teacher. In 1916 he went to Chicago to study with Blanche St. John Baker's sister, Jeannette Durno, who, while studying in Vienna for 14 years, was first a pupil and then a teaching assistant of Theodor Leschetizky. Franz Liszt and Leschetizky are considered to be the two great piano teachers of the 19th Century. Through Jeanette Durno and Leschetizky, Lyell Gustin could trace his musical lineage back to J.S. Bach.

Because of a back ailment which prevented him from becoming a concert pianist, Lyell Gustin returned to Saskatoon in 1920 and decided to devote his life to teaching piano. That same year, the house at 512 Tenth Street was built to serve as a residence for his parents and as his teaching studio.  It would be his home for nearly 68 years. Known as the Lyell Gustin Piano Studios, the house was not only one of the main focal points for music in Saskatoon, but it also achieved a national reputation for excellence in music, attracting students from other provinces. Graduates of the Studios in turn carried its reputation throughout Canada and into other countries. 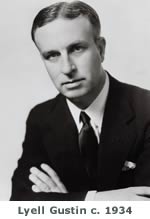 As one of the foremost music teachers in the province, Mr. Gustin had an outstanding career. Of the hundreds of students he taught, some 357 were awarded over 465 diplomas from Canadian and English music examining boards. There were students from each decade of his teaching career who went on to national and international careers as performers and composers, even though some of them did not receive diplomas while studying with him. In many years his students were the highest scholarship winners at local music festivals. Then there was the work he did throughout Saskatchewan and across Canada as an examiner for the Western Board of Music and Toronto Conservatory and as a festival adjudicator. As an executive member of the Saskatchewan Registered Music Teachers' Association and the Canadian Federation of Music Teachers' Association he influenced the music teaching profession across Canada. In 1942 he was an originator of the Young Artist Series sponsored by the Federation and it now consists of three regional tours in Canada. And last, but by no means least, there were all those students, whether or not they excelled in examinations or festivals, who attained a high standard of performance, sometimes much higher than they imagined they could attain, and who went away from his Studios with an ideal of excellence in music and an interest in the other arts which it is unlikely they would have obtained elsewhere. Many graduates of his Studios in turn went on to perform and teach music, some far afield in Europe and the United States, others in Canada, while a number remained in Saskatchewan. Mr. Gustin's teaching thus had an impact far beyond the confines of the city where he lived for so many years. 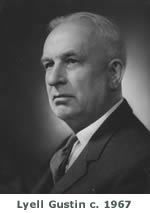 This widespread influence would not have been possible had it not been for Lyell Gustin's qualities as a musician, teacher and a tireless promoter of his students' interests. He had a brilliant intellect, enhanced by special artistic and musical sensitivity. The wider vision of music and the arts which he acquired from his teachers and his own pursuit of musical and artistic knowledge was passed on to his students by means of private lessons, monthly Interpretation Classes, monthly Soirees and other musical or social events. He created a special atmosphere in his Studios in which students came to accept discussion of music and the arts as a criterion for their own activities. He maintained contact with larger musical centres by personal visits or by guiding groups of students on tours to Chicago and New York. He provided student-artists with opportunities to give public performances in Saskatoon and other Saskatchewan centres, to give broadcasts on local radio stations or the CBC network, and to tour with the Young Artist Series. Saskatoon was indeed been fortunate in having a man of Mr. Gustin's stature and accomplishments as a resident. He brought much honour and recognition to the city and is worthy of high recognition for all his achievements. In the future, historians will look upon his career as possibly the most influential one in music in Saskatchewan during the twentieth century.